Produced from 1966-’68 as a special promotion vehicle for Colorado-area Ford dealers. The California Special GT/CS´s story and the HCS´s are intertwined, and some historians will argue, begins not in the Golden State, but in the Rockies, where one of the first-if not the first-regional Mustang limited editions was created in 1966. Despite a strong national case of Mustang fever, sales slowdowns were occurring in certain markets during the line’s second full year of production. Whether the drop was due to over-saturation or a slowing economy wasn’t important to Thurlo Newell of the Denver-area district office, who took delivery in July of 333 High Country Specials from the San Jose Ford plant.

The HCS cars, distributed through 100 Denver dealers, were available with any ’66 power-train and body style in one of three special colors: Aspen Gold, Columbine Blue, or Timberline Green. Receiving dealers installed shield-shaped brass plaques to the HCS front fenders (with sheet metal screws-yikes!) that featured a horse galloping across high mountain tops.
Because there were no exact specifications for placement of the badge, restorers have documented cars where the plaque sits above and ahead of the Tri-bar running horse. On some, the plaque rests above the “Mustang” lettering.

The uniqueness of the promotion must have created strong sales because in 1967, Denver dealers raised the order to 416 units (Kevin Marti).  Similar to the year before, the High Country Special could be ordered with any Mustang power-train and body style. Aspen Gold, Columbine Blue, and Timberline Green were the only available colors, although the green of 1967 was a slightly different mix than before.

In 1968, Denver’s success with the High Country Specials inspired Ford to design and produce 4,118 copies of a limited edition coupe for its West Coast dealers.  Based on Carroll Shelby’s “Little Red” ’67 show car hardtop, the GT/CS was an attractive combination of Mustang GT and GT350/500 parts.  Of the 4,118 units produced 251 were High Country Specials. 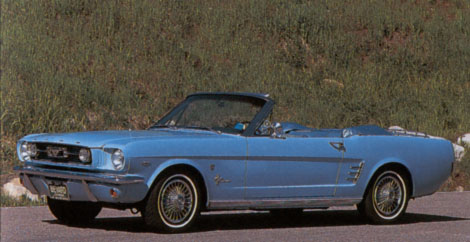 In the summer of ’66, exactly 333 “High Country Special” Mustangs, in coupe, convertible, and fastback form (one example only), arrived in Denver, Colorado, on a 23 car freight train.  Colors were limited to Aspen Gold, Timberline Green*, and Columbine Blue, as seen on this convertible (above).  Special brass badges affixed to the front fenders provided identification.  This car has the Pony seats, Rally Pac, and console.  The High Country Specials were devised by Thurlo Newell of Ford’s Denver zone office, and came to market two years before the better-known California Specials.

The 1967 High Country Special was available in fastback, convertible, and coupe.  It’s seen here in Aspen Gold, one of its three standard, special-order colors.  Columbine Blue and Timberline Green* were the other two.  Brass badges, mounted on the front fenders, spelled out High Country Special and the model year, 67.  The production numbers for 1967 was 416 units (Kevin Marti). 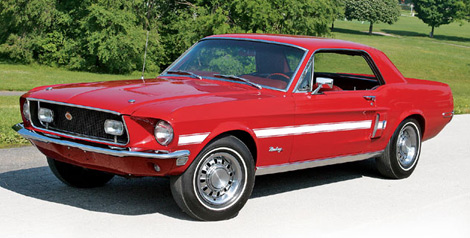 In mid-February 1968, the California Ford Dealers, who were inspired by the success of the Colorado Dealers marketing of the 1966 and 1967 HCS, wanted to market their own, limited-edition Mustang, called the GT/CS, or “California Special”.  The hope was for a targeted production run of 5,000, but actually, 4118 were made, which included the 251 “High Country Specials ’68”.