In 1966, a very special promotional Mustang was produced to commemorate the Mountainous areas of the Rockies. These were sold through dealerships in Colorado and had special badges. These were the first cars in a line of limited edition (besides the Shelby’s) classic Mustangs used to further enhance the interest in their pony car. In fact, only 333 were made, approximately 39 Convertibles, 20 Fastbacks 2+2 and 274 Hardtops!!! Calculations are based on the fact that Ford produced 607,568 Mustangs in 1966 82.25% Coupes, 5.88% Fastbacks and 11.87% Convertibles. 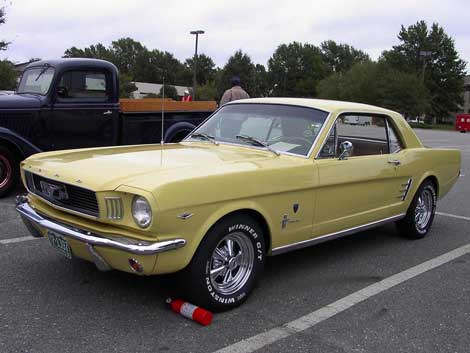 Although this package was basically functional only in appearance, it did serve as a small milestone for Mustang production. It showed that producing limited edition or short time production special Mustangs could attract new buyers.

These cars are INCREASINGLY uncommon to find. Also, not much help in locating these cars is the fact that not many people know about them. That is why they are hard to find!!! Another reason is that these cars really aren’t very distinctive. Without their special High Country Special Badges you would never know these cars were anything special. Even with it you wouldn’t notice anything until you closely inspected the car. But just stay on the lookout for one of these literally SPECIAL cars.

Some things to look for that signify a true High Country Special are of course the small brass High Country Special badges on the fenders, a color of ONLY Columbine Blue, Aspen Gold, or Timberline Green, and can only have been produced in the San Jose plant, have a six digit DSO code (51 02??) and the date code 15G (July 15). Engine options cannot tell one regular car from a HCS because any engine/transmission could be ordered for this otherwise “special” car. Keep the eyes peeled, the facts ready, and stay on the lookout for another rare, elusive STANG. Even if they aren’t catchy, how many people can say they own one??? Not many. Maybe you’ll get lucky and find one. Maybe………