According to Dave’s research, the Columbine Blue convertible originally sold for $3,437 at Goodro Ford on July 23, 1966, the first day the High Country Specials were available for purchase.  The convertible spent the next 33 years in the Denver area with four owners before being brought to Estes Park where Dave eagerly began transforming the convertible into a show-stopper.  Dave was relieved to find the High Country Special badges and all options still intact.  The original 289 2V engine and C4 transmission are in good condition, with 127,000 miles showing on the odometer. 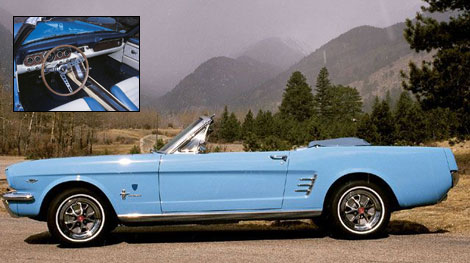 Dave completed the majority of the restoration in his garage and shop.  Stock ’66 wheels were swapped for ’65 wheels, and a fan shroud and air-conditioning fan blade were added to help cool the engine while driving in Colorado’s high country.  Most would agree the convertible has found an ideal home in Colorado.

Most Mustangs are not as fortunate as this pristine ’67 Aspen Gold High Country Special owned by Ron Bettinger of Golden, Colorado.  The convertible has remained in the Denver area since its original delivery to Courtesy Ford in Littleton, where Ron’s nephew was the sales manager at the time this HCS would have been delivered. 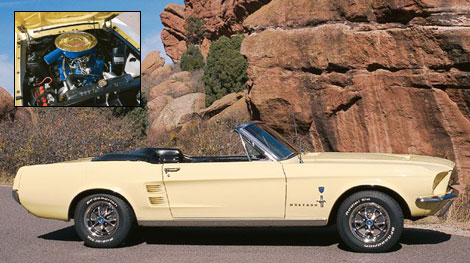 Bettinger says the convertible was in “good condition” when purchased 18 years ago from the original owner, a fellow junior-high teacher.  Over the years, the convertible has gradually been “updated” by replacing the convertible top, interior, and dash, as well as various mechanical items.  With just 82,000 miles, the 289-2V engine has never needed work.

There’s no doubt Bob Teets owns one of the rarest High Country Specials ever produced.  Teets’ ‘681/2 HCS, powered by a 428 Cobra Jet, was spotted by his son, Scott, behind an automotive frame shop in Denver.  Teets claims he was at the shop in less than 30 minutes after he heard the car included “double Rs” in the VIN; but the CJ hardtop was not for sale.

With no intention of letting this special coupe get away Teets visited the owner in the spring, summer, fall, and winter for many years.  Finally, in August 1995, after the coupe spent a total of 19 years covered with sheets of fiberglass awning and other junk, the owner agreed to sell the rare High Country Special to Teets. 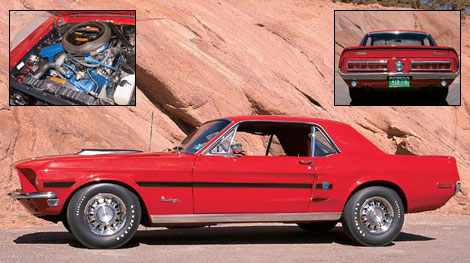 Closer inspection revealed that the coupe had survived its 89,500 miles relatively intact and still sported the original Candy apple Red paint and High Country Special options.  Unfortunately, the engine, transmission, and front seats were gone.  The car originally came equipped with a 3.91:1 rear backed by a limited-slip differential and a C6 automatic transmission.

Teets found many of the original parts locally and returned the hardtop to factory condition.  He reports the most frustrating parts to find included the smog equipment, air-cleaner assembly, carburetor, and correctly dated engine.