High-country Mustangs, 333 of them rode flanged wheels of steel across the Rio Grande July 18 from Salt Lake City to Denver, the first full trainload of sports cars to move as a single shipment across the system.

Involved were special Ford Mustangs, assembled and manufactured at San Jose, Calif. and shipped to Denver for distribution throughout Colorado, Wyoming and western Nebraska.

The railroad at San Jose, where the shipment originated, is represented by General Agent  A. F. (Fred) Holman, who worked closely with Ford Plant Traffic Manager Fred Durer in making the arrangements. 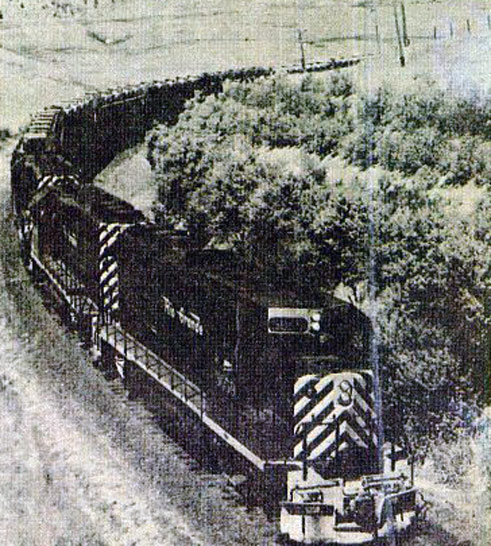 Unique, in addition to the idea of a complete trainload for one type of automobile, is the fact that the cars themselves are unlike any other Mustang in America.  The High-Country sports cars are especially made for car buyers in this Western area.  The colors, selected by local dealers, will never be used again.  The alluring colors are Aspen gold, Columbine blue and Timberline green.  The cars also carry “High Country” insignia on both front fenders, as well as the usual attractive Mustang emblems.

There were 22 tri-level cars in the train.
In addition to Cash and Holman, C. V. Colstadt, chief transportation officer in Denver, Ed Roe, advertising manager, and many other Rio Granders worked to make the move a success.

This is an example of Rio Grande’s faster and more frequent scheduling to give our customers the best in rail service, and it is in keeping with our theme.  ‘Why Not!’  Traffic Manager Cash said.