This 1966 High Country Special is one very rare pony.

Two years before the GT/California Special’s mid-1968 introduction, Ford built their, first limited edition Mustang model for sale exclusively in one geographic region, The 1966 High Country Specials were built at Ford’s San Jose plant for sale only in Colorado, Wyoming; and parts of western Nebraska, These 333 rarities arrived in Denver on July 18, 1966 via a special chartered Denver & Rio Grande Western train that carried nothing else on that trip.

Train buffs and Mustangers alike would undoubtedly have enjoyed seeing three diesel locomotives pulling the 22 tri-level railcars loaded with nothing but Mustangs, mostly hardtops, a mere handful of convertibles, and one(!) fastback, over the Rockies. And what a sight it must have been, for each of these Mustangs was painted in one of three new and unique colors, Aspen Gold, Columbine Blue, or Timberline Green, that were not available on any other Mustang that year.

In addition to being cloaked in one of the three exclusive High Country Special colors, the exteriors featured brass and enam­eled “High Country Special” badges which were later affixed to both front fenders by the individ­ual dealerships.  Each of the 100 or so dealerships in the Denver DSO (District Sales Office) region was free to position the badge wherever they wished, and surviving exam­ples of these rare ponies have been seen with the badges mounted directly above the running horse emblem, above and to the left of the horse, and centered directly over the, “MUSTANG script” on the fender, wire wheel covers were optional, and the 1966 High Country Specials came with a equipped with a variety of standard and optional drivetrains. 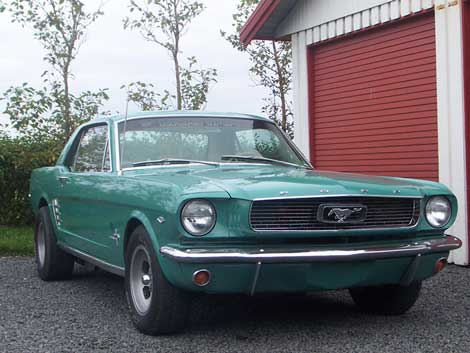 This particular Special was delivered to Phil Long Ford, in Colorado Springs, Colorado, and purchased by J. Swanson and his wife Bonnie, on the 18th of August, 1966. It was one of the last High Country Specials at that dealership.  As delivered, the Swanson’s Timberline Green Mustang came equipped with the 289 cid V8-cylinder engine plus optional four speed transmission and power steering, 695 x 14 bias-ply whitewall tires, an AM radio, and tinted windshield. Including transportation charges, the total sticker price came to $3157.81.

The Swansons moved to California in March of 1967, taking the HCS with them, and over the course of the next three and a half decades, the little High Country coupe served them well, until their retirement in 2002 when they sold the HCS to Iceland.